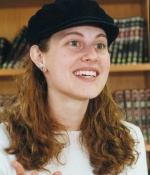 For whom the program is named.

Dr. Beth Sharon Samuels, a”h, was a gifted teacher of Torah and mathematics, inspiring her audiences with her passion for learning and life. She was born and raised in Los Angeles, California and was an alumna of Hillel Hebrew Academy, YULA High School and Michlalah in Jerusalem. During her high school years, Beth became an activist in causes of hesed and women’s opportunities for serious Torah study. She continued to pursue these causes fervently throughout her brief life.

Her childhood education gave her a profound appreciation for a Torah-encompassing life. However, she was not exposed to what she described as the “intellectual immersion” into Torah study until she began learning at Drisha Institute during her college years at Columbia University. At Columbia, she also directed the hevrutah program, “Wednesday Night Learning,” attracting hundreds of students to commit to serious weekly Torah learning. She was active in Lights-in-Action, an organization concerned with providing a forum for Jewish education and awareness at secular colleges, and she spent time with YUSSR in the Ukraine running programs for Russian Jews.

After graduating college, Beth studied full time in the Scholars Circle at Drisha, in the Talmud and Tanakh program. She also served as an auxiliary New York City police officer while she was living there. At this time, Beth married Ari Tuchman. Her pursuit of knowledge then led her to earn a doctorate in mathematics from Yale University, where she focused on number theory and automorphic forms. She continued to teach Torah extensively to the New Haven community, as well as to lead women’s prayer groups and Purim megilah readings. As a graduate of the Drisha Scholars program, she frequently traveled around the country as a scholar-in-residence, including a memorable visit to Los Angeles in 2000 when Beth was invited by the Orthodox Union to give shiurimat a number of Westside shuls for Leil Shavuot. For two years, she commuted to New York City in order to direct and teach in the Drisha high school program. Beth and Ari’s family also grew with the joyous birth of a daughter, Danelle.

Soon after relocating to Palo Alto, CA, Beth and Ari celebrated the birth of their daughter, Natalia. Beth prioritized her time with her family, infusing her love for Judaism and her unwavering emunah into her home. She became an assistant professor of mathematics at UC Berkeley, and continued to be active in the ritual, intellectual and communal life of the Bay Area Jewish community. Beth also remained continuously connected to both women’s learning in general and Drisha specifically. She returned to New York to teach both at the Drisha dinner and the new winter week for high school girls and consulted on high school activities. Just two months before she passed away, Beth was the keynote speaker at a Los Angeles conference on girls’ education at Modern Orthodox schools.