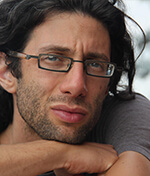 Aaron Koller is associate professor of Near Eastern and Jewish Studies at Yeshiva University, where he is chair of the Robert M. Beren Department of Jewish Studies, and also Core Faculty and Coordinator of Adult Educational Programming at Drisha. His most recent book was Esther in Ancient Jewish Thought (Cambridge University Press, 2014), and his next book, Unbinding Isaac, on the ‘aḳedah in religious philosophy, is forthcoming, but he usually works on Semitic languages and linguistics. Aaron has served as a visiting professor at the Hebrew University in Jerusalem, and held research fellowships at the Albright Institute for Archaeological Research and the Hartman Institute. He lives in Queens with his wife, Shira Hecht-Koller, and their children.