As Western humans we believe in humanism, but can Jewish tradition contribute something to our understanding of human dignity? There are many Jewish sources on this issue, but can a Jewish perspective on this issue be said to exist? Abraham Joshua Heschel (1907-1972) believed that we can develop such an approach. In his view, Jewish philosophy is best deployed not to help the modern Jew to live in the West but to inspire Western civilization with the Jewish perspective on human dignity. This course introduces the philosophy of A. J. Heschel about human dignity as a divine concern. It will include his interpretation of tzelem Elokim as well as his views on racism, religious pluralism, and other issues which reflect his approach to human dignity. 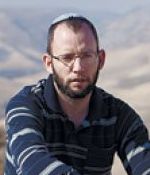 Dror Bondi is dedicated to bringing Abraham Joshua Heschel's thought to Israel, translating his words into Hebrew and transforming Israel by his spirit. Dror has a doctorate in Jewish Thought from Bar-Ilan University and his dissertation, Heschel's Hermeniutics, will be published next year. Dror has translated several of Heschel's books into Hebrew. He is the author of Where Art Thou? which won the Shalem Prize in 2006. He lives with his family in Jerusalem in Beit Yisrael, an urban-kibbutz community of religious and non-religious Jews who unite together in social and spiritual activism