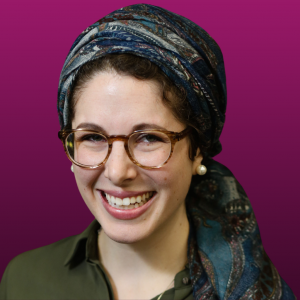 Rabbanit Leah Sarna is the Associate Director of Education and Director of High School Programs at Drisha. She previously served as Director of Religious Engagement at Anshe Sholom B’nai Israel Congregation in Chicago, a leading urban Orthodox congregation. She was ordained at Yeshivat Maharat in 2018, holds a BA from Yale University in Philosophy & Psychology, and also trained at the SKA Beit Midrash for Women at Migdal Oz, Drisha and the Center for Modern Torah Leadership.

Rabbanit Sarna’s published works have appeared in The Atlantic, The Washington Post, Lehrhaus and MyJewishLearning. She has lectured in Orthodox synagogues and Jewish communal settings around the world and loves spreading her warm, energetic love for Torah and Mitzvot with Jews in all stages of life.